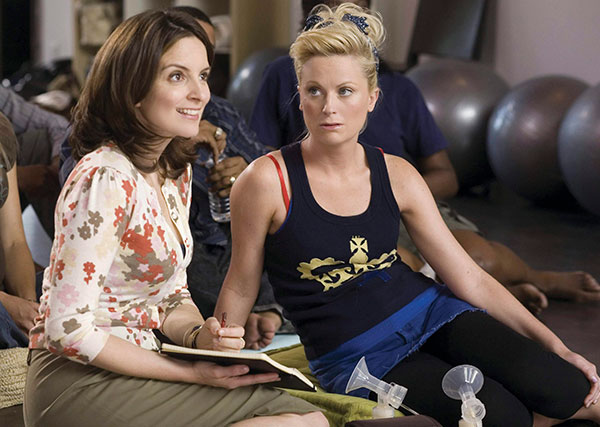 Successful and single businesswoman Kate Holbrook has long put her career ahead of a personal life. Now 37, she’s finally determined to have a kid on her own. But her plan is thrown a curve ball after she discovers she has only a million-to-one chance of getting pregnant. Undaunted, the driven Kate allows South Philly working girl Angie Ostrowiski to become her unlikely surrogate. Simple enough … After learning from the steely head of their surrogacy center that Angie is pregnant, Kate goes into precision nesting mode: reading childcare books, baby-proofing the apartment and researching top pre-schools. But the executive’s well-organized strategy is turned upside down when her Baby Mama shows up at her doorstep with no place to live. An unstoppable force meets an immovable object as structured Kate tries to turn vibrant Angie into the perfect expectant mom. In a battle of wills, they will struggle their way through preparation for the baby’s arrival. And in the middle of this tug-of-war, they’ll discover two kinds of family: the one you’re born to and the one you make. 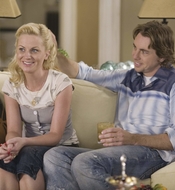 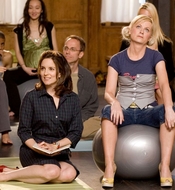 Baby Mama filmed for nine weeks in Philadelphia, where the comedy is set, and in New York. For Tina Fey, it was the first time the Philly native felt her accent served the story. “I’m excited my natural Philadelphia accent is finally appropriate,” she says.

First-time director McCullers had spent a good deal of time on the sets of the Austin Powers films he co-wrote with Mike Myers; there, he absorbed a great deal about film production. His long-term collaboration with Myers and his stint as a writer for Michaels on SNL also gave McCullers ample experience working with writers/performers such as Poehler and Fey. “I’m used to writing for performers, then having performers write for themselves—and the give-and-take between a writer and a performer or director,” he reflects. “You get these people because they’re funny, and you want to see them be funny. If everybody in the scene can do that, it starts becoming exponentially funnier.”

Not only did Poehler and Fey make their additions to dialogue prior to filming, they pitched each other ideas throughout the shooting day, and then improvised on set— all encouraged by the director. Of Fey and Poehler’s methods, McCullers states: “Sometimes working with them is just saying ‘Action,’ and then I watch and see what they do, then I laugh at it, then I say, ‘Cut.’ Every day on the set, they added a little something that made it better, which is a luxury for me.”

Concurs producer Michaels: “I don’t think you can do a comedy that’s specifically for a comedian without tailoring it for that person’s style.” For his lead’s signature styles, he adds, “They’ve known each other a long time and they work in different ways. There’s a little bit of wildness in Amy, which I think the audience knows and senses. But when the wildness in Tina shows up, it’s perfectly complementary.”

Poehler and Fey relished the opportunity to continue their creative collaboration on set. “The people that Michael included are used to collaborating and, in many ways, SNL prepared us for that,” says Poehler. “You get used to taking the best idea and the best joke and the best version, and you get used to pitching to each other. That comes from mutual respect, boundaries and a shared language that you only get from working together so much.”

Shepard, no stranger to improvisation from his work on Punk’d, found improv opposite Poehler a bit of a challenge. “Amy’s the funniest scene partner because she’s a heavyweight comedian in this super-adorable, cute, little blond package,” he says. “You let your guard down a little bit, and the next thing you know, she sucker punches you out with some comedy.”

Malco also came up with “new funny line after new funny line,” according to McCullers. But it was Malco’s songwriting that was especially memorable. “His character has an iPod throughout the movie,” explains Fey. “You hear Romany singing to all these songs, but he was just making them up as he went along—songs that were very catchy with the crew.”

Greg Kinnear called upon talents that took him back to his training as a comic writer and performer. Commends McCullers, “Surrounded by all these comedians who can really improvise, Greg was game to go along with them and add his own stuff.” As Fey’s character’s love interest, Kinnear surprised her. “I never knew Greg was so good at pratfalls and physical comedy,” she says. “He’s got very good comic timing and a very light touch.”

Kinnear also had praise for Fey’s improvisational ability. “It’s amazing to me that she hasn’t been acting that long, and clearly when you see 30 Rock, you know she has great talent and confidence,” he offers.