Published by Elle Magazine on March 5, 2009 | Written by Corrie Pikul 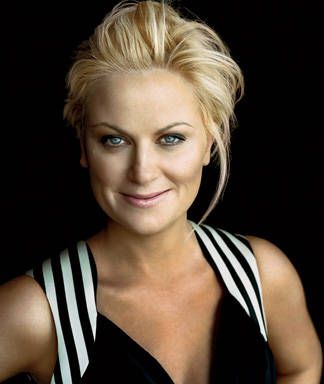 Amy Poehler helms a show of her own

Last year, Amy Poehler, hilarious and hugely pregnant in her final season on Saturday Night Live, gave Americans exactly what they needed in the midst of a tumultuous presidential election—some serious comic relief. (We didn’t see Conan rap “like an animal” for Sarah Palin on national television.) Although we’re still adjusting to Saturday nights in the post-Poehler era, the 37-year-old new mom gives us something to look forward to this month: NBC’s Parks and Recreation, in which she stars as Leslie Knope, an overly ambitious bureaucrat in the Pawnee, Indiana, parks department. The show’s executive producers, Greg Daniels and Michael Schur, also write and produce The Office. So is this the spin-off we’ve been hearing about? “You’ll see some similarities in style,” Poehler says. “But it’s a whole new ship of which I am Captain Idiot.” Poehler, now temporarily bicoastal in L.A., paused from fawning over her newborn, Archie (not to mention her equally adorable actor husband, Will Arnett), to share her thoughts on her latest gig.

You worked right up until the day you gave birth, occasionally hiding your belly on the show, and at other times using it as a comedy prop. Did you enjoy being pregnant?
It’s really nice. You make people happy. There’s a reason why Santa Claus and Buddha both have big bellies. But as soon as you have your baby, nobody cares about you anymore. They just want to make sure you don’t sit next to them on the plane.

You’d been at SNL for eight seasons. How did you decide it was time to leave?
It felt like the right time. My contract was ending. From coming up in improv, I know when to edit. And I think it was time to edit. When everyone’s laughing, that’s usually when I like to take my exit.

How does it feel to watch the show now?
It’s exciting because I’ve become a regular viewer. You have no idea what sketch is going to be on or what the take is going to be or what the story is behind sketches, what got cut, who switched—all the drama. But it’s also weird. I have such love for the show and such respect for the institution. You kind of pass through there and then you jump off the train and watch it pull away and you’re covered in dust for a while and you’re like, “Oh my God! No ride’s ever gonna beat that!” And then you dust yourself off and realize there are other trains that you can jump on.

It must be hard to watch the news and not want to spoof it on “Weekend Update.”
Listen: Two days after my last show, Bush almost got hit with a shoe. I was like, “Oh man! It never ends!” I know people who have been gone for years and still send you texts with ideas.

Your character, Leslie Knope, is an appointee in the Pawnee, Indiana parks department. How have you been preparing for this role of a cog in the wheel of small-town bureaucracy?
I have been pushing a rock up a hill and watching as it slowly rolls back down.

Do you feel a lot of pressure for the show to be successful?
Not to get too actor-y, but I look forward to stepping into a character and staying there for a while and stretching in different ways. I’m lucky enough to be jumping in with friends like Greg, Mike, Rashida Jones, and Aziz Ansari, and that makes things easier. That’s a long-winded way to say: I do feel a lot of pressure. You can’t help it. So I’ve been handling it by taking up boxing; I’m wildly addicted to pills; and two to three times a week, I do scream therapy, where I scream into a pillow.

SNL has had amazing, hilarious female comedians for decades, but for the last couple of years, you and Tina Fey were practically headlining the show. Do you think you represented a turning point for female comedians on the show?
I have to say, women were a huge presence on the show for years. It certainly didn’t start when Tina and I got there, and it certainly won’t end when we leave. Lorne Michaels has done more for women in comedy than anyone I know. Gender can kind of make you special, but at the end of the day it’s about, “Are you making people laugh? Are you producing stuff that the audience is responding to?” It’s very egalitarian in many ways. Everybody gets the same length of rope to climb up or to hang themselves with. I’m not dismissing that there are certain things that you kind of have to bump up against as a woman in comedy, but, frankly, it’s like, Who cares? Everybody’s got their shit: you’re fat, or you’re tall, or you’re black, or you’re a lady, or you’re a good-looking guy, or you’re a skinny, non-good-looking guy. Everybody has their thing and they have to figure it out, and every actor wants to feel like they’re not limited to that thing.

Aside from 30 Rock, there really aren’t that many hilarious shows by or about women on television. Are you trying to change that with your show—do you have a feminist agenda?
Everybody enjoys stories told from different perspectives. When films with female leads do well, for example, people are always like, “That’s interesting.” It’s not really that interesting. People want to hear different stories told by different voices, so you have to make sure different voices are heard. It was exciting to do “Weekend Update” with Tina, but it would be eye-rolling and self-righteous of us to think that at any point on SNL we locked arms and were like, “C’mon, let’s do it for the sisters!” No, it was more like, “Let’s be funny!” Any time you become too self-important, it can affect your comedy. It can become more about you than the piece, and then you’re screwed.

You get asked a lot of questions about feminism and comedy, don’t you?
Yes! All the time. And I do consider myself a feminist, so I’ve been branching out and doing other stuff to feel connected to the movement, like producing this Internet show called Smart Girls at the Party. It’s basically a Charlie Rose-style interview show where we ask young girls what they want to be. I’m fascinated by the age when kids are on the precipice of deciding who they are and what they want to do. For them, the sky’s the limit, but we slowly narrow things down as we get older, and people start telling us what we can’t do. I think it’s important to imbue self-confidence in young girls and make them feel good about themselves.

So back to “Why aren’t there more women in comedy?” That’s a question that I feel should have been asked of people like Gilda Radner, and I don’t feel like it has the same weight today. I interviewed Phyllis Diller once—talk about women in comedy! She was the only female stand-up for years! Women like her were the true pioneers. I like to think that by the time the girls I’m talking to for Smart Girls get older, the question of the lack of women in comedy will be this bizarro old-fashioned thing. I think it already is, in a way.

By “we”, are you referring to you and your husband, Will Arnett?
No, me and Oprah. Oprah says this year is about taking care of yourself, and I’m all for it. We can’t love others if we don’t love ourselves first.