Published by Paper Magazine on April 1, 2003 | Written by Papermag 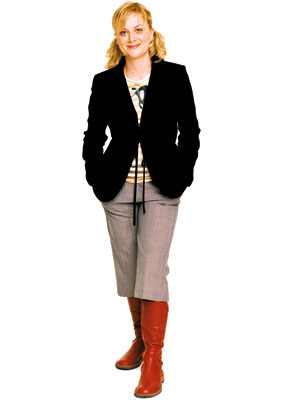 “I get mistaken for Tracy Morgan a lot,” explains comedian Amy Poehler. She’s referring to her fellow Saturday Night Live cast member, who is an African-American male, and she’s joking. Poehler has been crafting her quick wit since the early 1990s, when she started doing improv in Chicago with troupes like Second City and the Upright Citizens Brigade. In 1996, she was one of four people who helped bring UCB to Manhattan, where she landed a full-time gig on SNL.

Her first appearance on the show was during the week after 9/11. “I just stayed out of the way and tried not to ruin anything,” she recalls. The Burlington, Massachusetts, native did better than that, garnering attention with her impressions of Tonya Harding, Sharon Osbourne and Fox News fox Greta Van Susteren. Though she’s not as high profile as, say, Jimmy and Tina, Poehler has proven herself to be an indispensable asset to one of SNL‘s sauciest casts ever. She’s still closely involved with the Upright Citizens Brigade, and occasionally she goes big-time Hollywood, appearing in films like Deuce Bigalow: Male Gigolo and as Jack Black’s wife in Barry Levinson’s upcoming Envy. Her jam-packed career seems satisfying, even if there’s no rest. “I don’t know what that phrase means, ‘not working,'” she admits. “I guess other people would go to a movie or read some kind of magazine, right?”